The emphasis of the collection is on mopeds from the early 50’s and to special models. 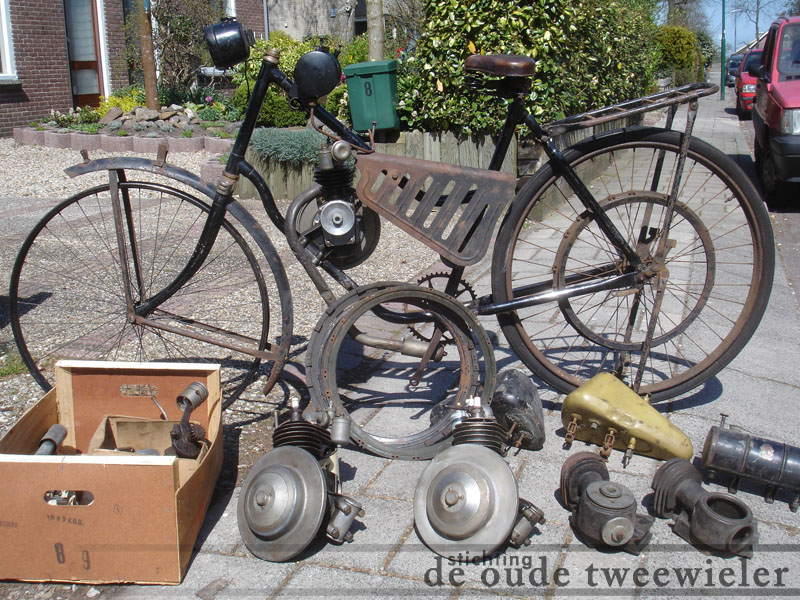 On the picture there is a BMI (Metal Industry Bilthoven). These 80cc engines were made at the Rembrandtlaan 22 in Bilthoven, between 1934 and 1937. It was possible to buy just the engine and put it on your bicycle. Or you could buy a complete bicycle with engine. The bikes used for the complete BMI's were most of the times Senders bicycles. Senders was located just around the corner from BMI. The small engines were also sold to the Dutch railway company for the maintenance of the railway. This BMI is a ladies version. 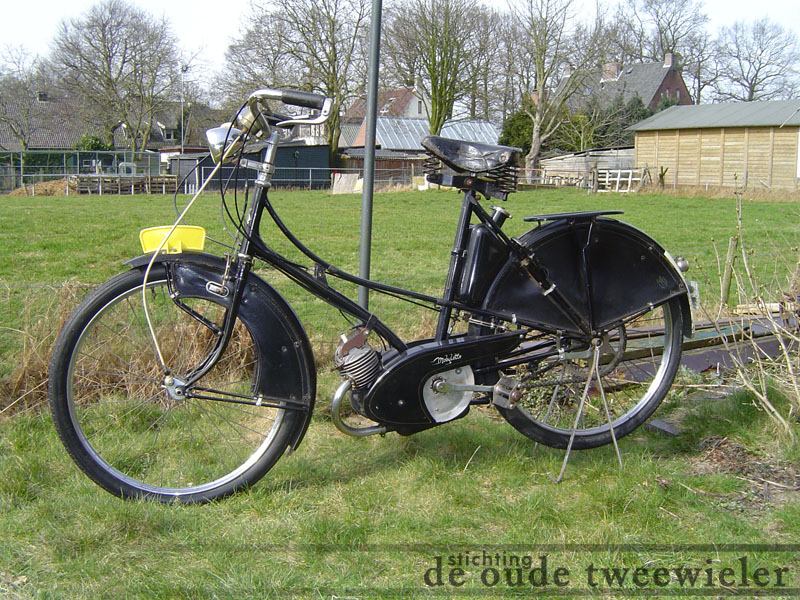 This unrehabilitated, 1950, Mobylette was one of the first produced by Willem Kaptein in license of the French Motobecane. Therefore the name Kaptein Mobylette. These mopeds were so excellent of quality and so sharp priced they became an example for many Dutch manufacturers. The shown model still has no clutch. Last time it participated in traffic was in 1966; that's the year when the insurance plate at the back of this moped was attached. This around 1951 Wingwheel is edit to a 1932 Gazelle bicycle. It is totally rehabilitated. Wingwheel was produced in Weesp. You bought a loose motor with tank and fasteners, you turned the front fork in your bicycle and you assembled the whole. The price-quality rate was very unfavorable; the price was relatively high and the quality moderate. So this brand was pretty soon disappeared of the market. Unfortunately about the brand Beumer (as shown nearby) is, still, very less known. The Beumer family had a cyclist store in Amsterdam. Shortly after the war, they edited belt driven Rex-motors to bicycles. Probably with this model they tried to anticipate to the postwar needs. This can be seen in the fastening of the tank: two big hose clamps. The moped did not drive from 1960 to 2003. This Beumer was a gift.

When Berini, in Rotterdam, designed the Cycle Star, as shown nearby, they obviously looked at the success of Kaptein Mobylette; especially the design of the frame. The engine block with rolgear was a Berini's own product. The year built was around 1953. 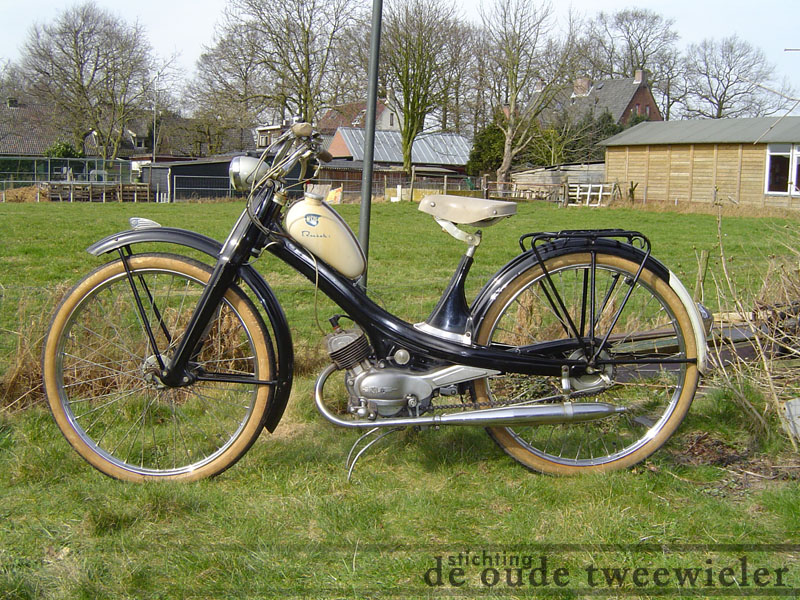 This NSU Quickly is from 1954. Years ago this model was donated by its first owner. Besides the backlight it is in original state. This type of moped certainly contributes to the rise and development of mopeds in the Netherlands after World War II. 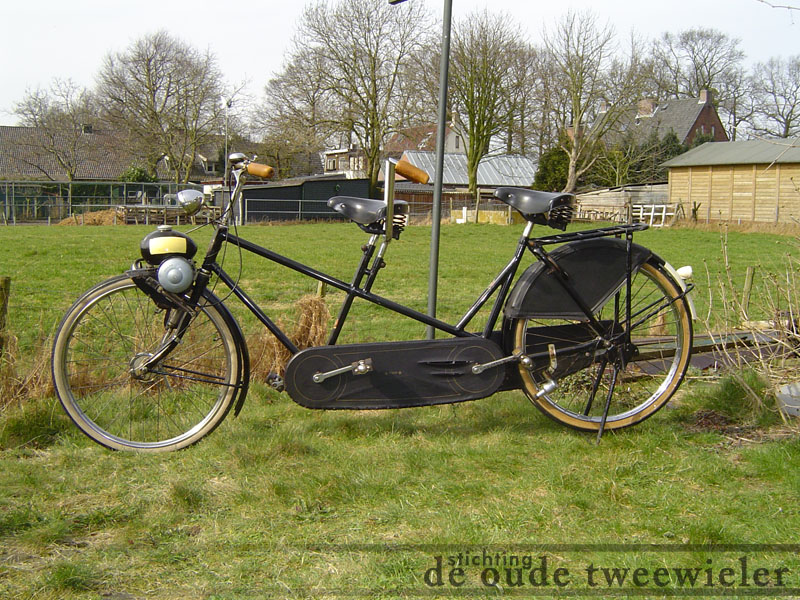 This tandem is one of the last products that exited the old Eysink factory in Amersfoort. It was delivered as new with, at the front, the famous Berini M13 “Egg” from 1951. Everything is still in original and unrevised state and was acquired from the first owner. 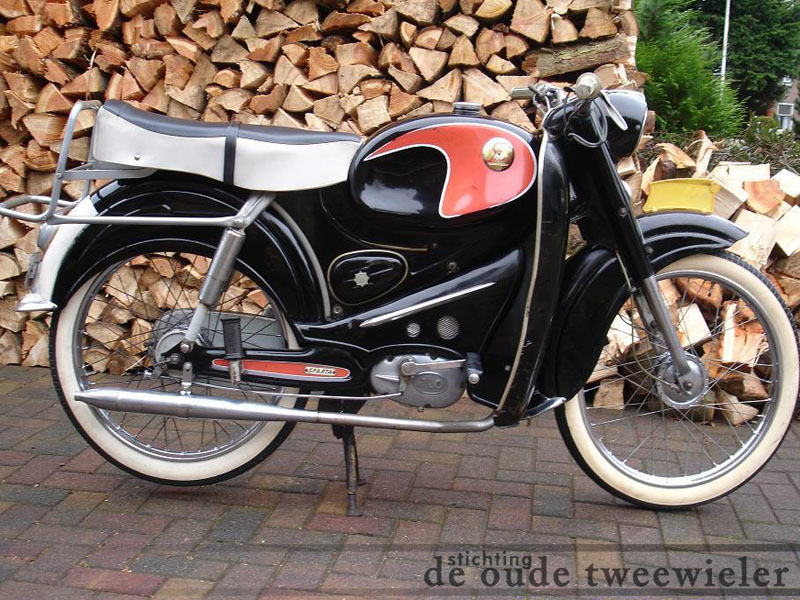 This Sparta is from 1960. De first owner has driven on it untill 1981 and we bought it from the family. The Sparta mopeds were very good technically, that's why there are a several left over. This is a Kreidler Florett from Germany, build in 1966. It is the first type with a big tank, the types before this one had an 'eggtank'. In the sixties in the Netherlands boys were driving Kreidler, Zundapp, Honda, Puch or Tomos. Which brand depands on the place you lived and the dealer in the neighborhood. This Kreidler was a gift from a closed museum in the Netherlands and we are really happy with it. Next you can see a 1968 Eysink Supersprint. This is one of the most beautiful Eysink sport type of the 60’s. This moped is still in a very nice and original state. The corresponding bill is even present.