Mainly because lack of space the emphasis is on bicycles before 1900. Around 1900 models, as we still recognize them, entered the market. In the collection there is always space available for technical interesting models. 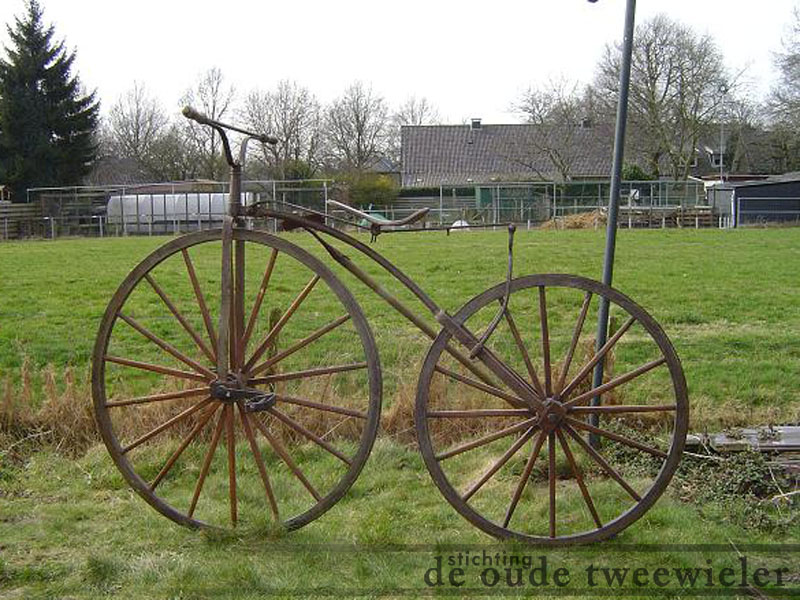 Around 1864 the brothers Michaux, as first, edited pedals to a bicycle (till that moment only walking cycles exist). When they introduced and demonstrated the bicycle at the World Exhibition of 1867 in Paris, it was a huge success. Many vehicle manufacturers from different countries ordered a Michaux-bicycle as an example to copy it. Although gifted technicians, they forgot the patent their invention. The bicycle as shown on the photo is such a copied Michaux; it is produced in France.

This is a Dutch wooden boneshaker from around 1869. This bicycle is probably built by a vehicle manufacturer or a smith. In that time the bicycle was probably meant for a well-to-do, rich person, otherwise nobody could afford it. It was a Dutch bicycle, because of the comparison with Dutch horse chariot, they both have similar wood carvings.

Nearby you see an 1886 boneshaker from the brand Singer from Coventry. The model is named Challenger. Next you can see the steering-head plate of the boneshaker with the brand name on it. On the picture shown next you can see a tricycle of Peugeot from 1889. These tricycles were very popular at that time of high bi’s. Not everybody dared to sit on such a high bicycle. Therefore people preferred the tricycles. 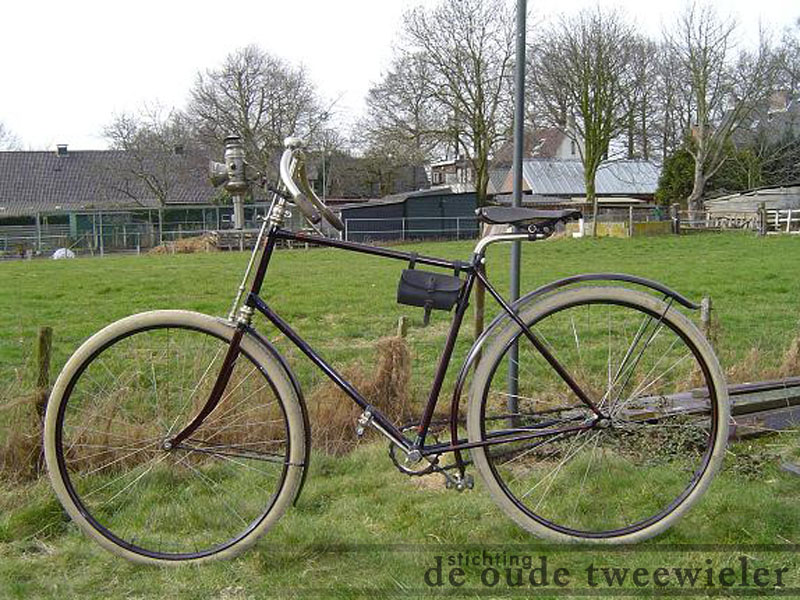 This is a French sports bicycle from around 1893. It is probably one from the brand Hirondel. The shape is typical for this period; at that time an enormous progress was booked within bicycles. From than on air tires were massively used and the high bi lost popularity. Many bicycle manufacturers arise and the bicycle got more and more accessible. 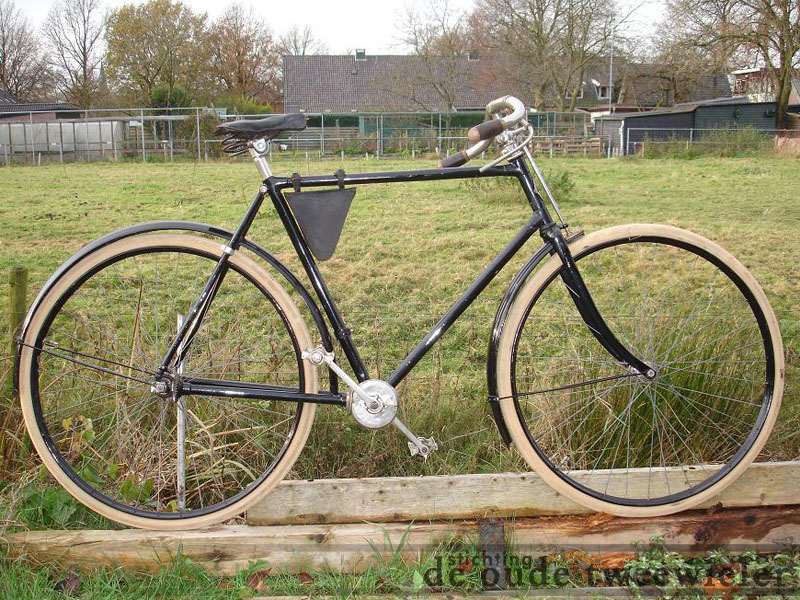 Here you can see an Acatene Metropole (Acatene means without a chain, but with a crankshaft). The Belgian company FN made the first crankshaft bicycle in 1889. The bicycle on the photograph was produced by the company Metropole at rue 17th St. Maur in Paris. They made this bicycles between 1894 and 1898. This is a Lydia lady bicycle with wooden rims and wooden wheel arches. Lydia was a Belgian (bicycle) brand. This piece is from around 1919 and typical for the Belgian bicycles of that time. They needed big balloon tires for some comfort on the many cobble stoned roads. In the beginning Gnome et Rhone was an aircraft engine factory. After the First World War they started making motorbikes. They also made a small amount of bicycles. The aluminium bicycle was produced between 1932 and 1952. This one is from around 1950. 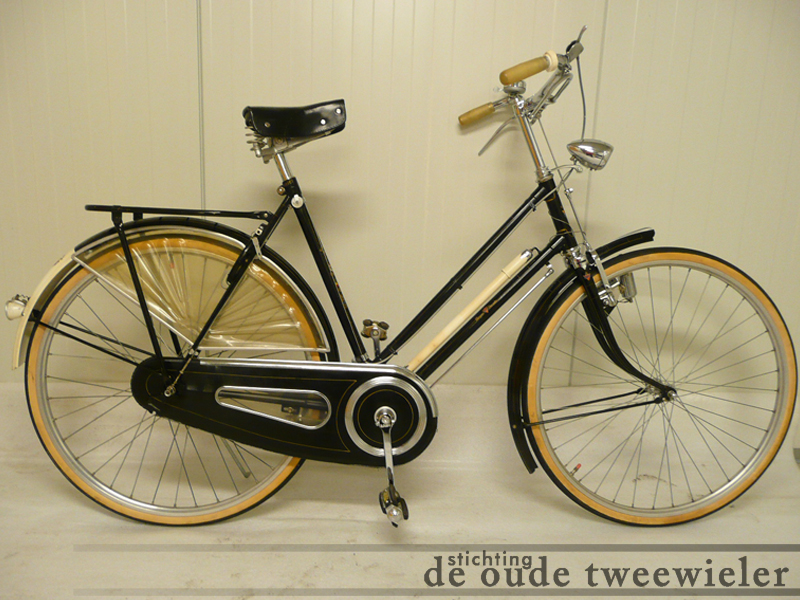 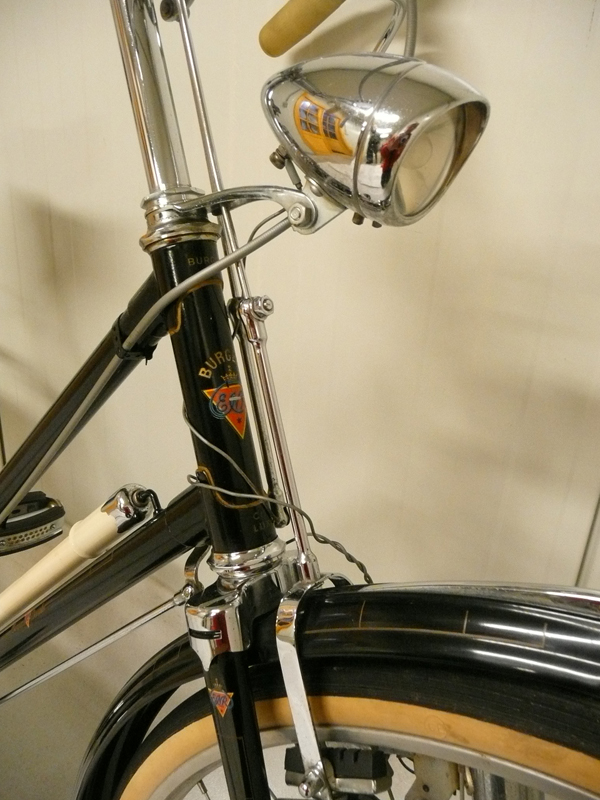 This is a unique Burgers bicycle, because it was never used. It doesn't happen often that bicycles from the fifties are New Old Stock. The logo of Burgers is placed all over the bicycle: on the light, the dynamo, the handlebar, the saddle, the lock and even on the tires. The bicycle has aluminium rims (26 inches) and a three-speed hub of Sturmey Archer. At the end of the fifties the brand Burgers experienced some problems. This bicycle is still from the original Burgers factory in Deventer. In 1961 the name of the brand was bought by Pon from Amersfoort and they moved the factory to Amersfoort as well. This was the end of a famous Dutch brand. 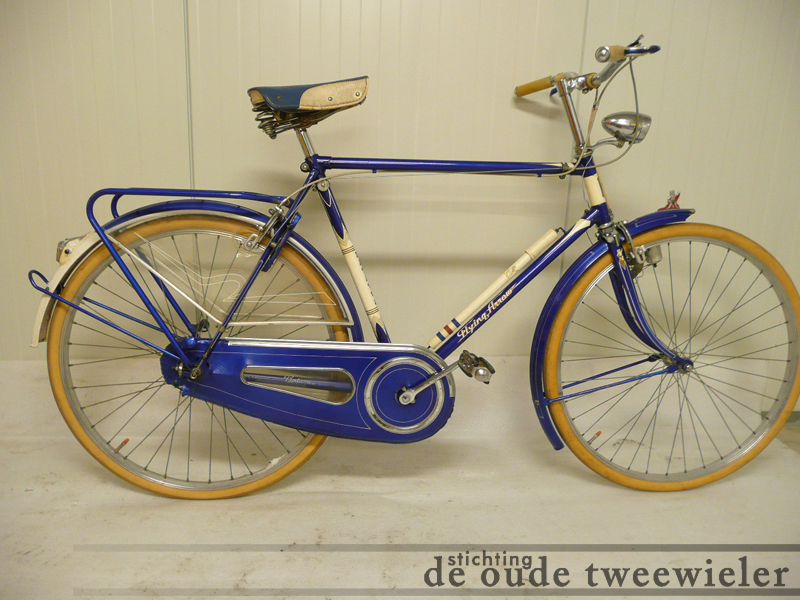 This is a Batavus Flying Arrow Special Sport bike. When Batavus designed this bicycle in 1957 it was the best and most beautiful bike on the market. The colorful painting and pretty details make it a very special bike. Even nowadays, when you ride the bike, people are surprised by the appearance. This bicycle has 26 inch wheels and aluminum rims. The original price of this bicycle was f265,85. It is hardly used and was located indoors. Therefore the bike is in a good condition. Because of the many details it is hard to recover a bike like this one. For this Flying Arrow we are still looking for a bell in a good condition. Here you can see an Union Strano from 1963. In that time Union was located in Den Hulst. Later on this was named Nieuwleusen. In 1963 Union advertised with the Strano-compact bicycle. Union claimed this design bicycle as their design, but in the forties the construction was already applied by an Italian. This bicycle was not a success, probably not more than 2000 pieces were produced and they only reached the dealers. Therefore the Strano's that are left, are most of the time in very good conditions. In 1964 Gazelle presented their first compact bike, the Kwikstep. The Dutch economy grew quickly and more cars were sold. And so were the compact bikes. This bike is in original state. The bike can be folded by turning the bayonet on the seat tube. In 1965 Gazelle presented a lighter version of this bicycle and this one was sold for many years.